The Inauguration of President Joe Biden 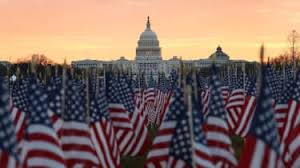 On Jan. 20, 2021, at 10:00 a.m. Joe Biden was sworn into presidential office for the United States of America. After a tumoutouslous election and months of recounting and lawsuits, the election was finally certified on Jan. 7, 2021. Then on Jan. 20, Joe Biden and Kamala Harris were sworn in. Kamala Harris became the first woman and person of color to take the position of vice president. Former president Donald Trump left the White House in the early hours of Inauguration day. Trump did not attend Biden’s inauguration being the first to do so in 152 years. Former vice president, Mike Pence, did attend the inauguration of the new president Biden, as did others of Trump’s former administration.

Biden has already announced that his main focus when first starting his presidency will be to provide Covid relief to America. His other first policies will revolve around immigration and climate. The speakers/ performers included Lady Gaga, who sang the national anthem, Amanda Gorman, who read the inaugural poem, and Reverend Doctor Silvester S. Beaman. Amanda Gorman was the youngest poet laureate for the inauguration and was another part of the inauguration that made history. There were many guests who attended while they also tried to maintain as safe as possible to prevent the spread of the virus. Eugine Goodman, the Capitol Police officer who defended the capitol raids, escorted Harris at the inauguration.

The Biden inauguration was one to make history and will definitely be remembered for centuries to come. Joe Biden will start his roles in office on Jan. 21 and will hopefully lead a presidency of union and prosperity.