What is Happening With GameStop? 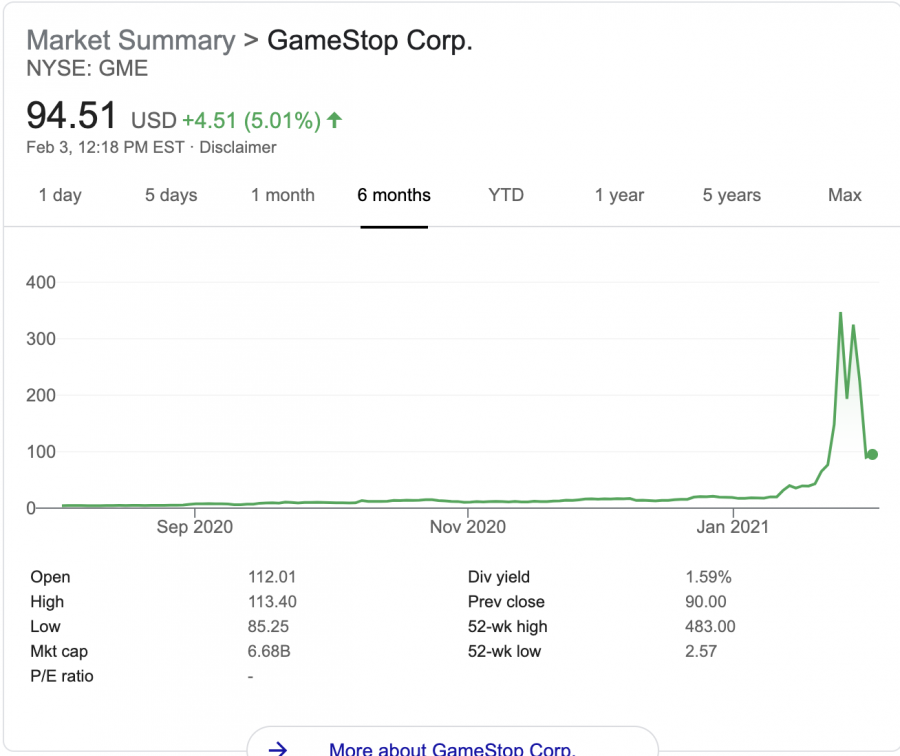 With recent technological advancements GameStop, the video-game selling store, has become the new BlockBuster. Gamers can easily buy games online and play them right away or have them shipped from retailers like Amazon. GameStop was being left in the dust until about a week ago. The GameStock that had been steadily between four and five dollars shot up to 340 dollars on Jan. 27. There, of course, is a rhyme and reason to this spike, but it’s just as interesting as the spike itself.

Recently, thanks to how low the GameStop stocks were, many professional investors were making bets that the GameStop stock would drop even more. This is called short sales. “In such bets, called “short sales,” investors borrow a share and sell it in hopes of buying it back later at a lower price and pocketing the difference. GameStop is one of the most shorted stocks on Wall Street” is how the Chicago Tribune explains short selling and how that impacts GameStop.

When a group called the “WallStreetBets” on Reddit started encouraging stock buyers to buy stocks in GameStop to mess with the stock brokers of Wall Street, this kick-started the short squeeze of GameStop. “When a stock is very heavily shorted, a rise in its price can force short sellers to get out of their bets. To do that, they have to buy the stock, which pushes the stock even higher and can create a feedback loop”, says Stan Choe from the Chicago Tribune.

This entire phenomenon has led to an immense increase in price of the GameStop stocks,  as well as the American Airline stocks, and BlackBerry stocks. All of it together has led to many pleased buyers whose stocks have made up to seven times the amount it had originally. It also leads to a lot of angry stock brokers who have been manipulated in the recent week. The GameStop stock phenomenon has been an incredibly interesting occurrence that shows where the stock market and the economy is at. Many also believe that this phenomenon is a message sent to the government and the 1 percent of America from the rest of  America’s citizens. Overall what the world and specifically America has seen with the stock market in the recent weeks, it remains apparent how our economy can rely on the stock market.