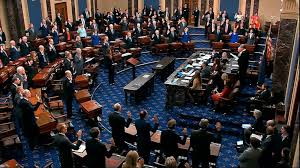 On Feb. 9, 2021, the impeachment trials for Donald Trump will start for the second time. The big difference is that he isn’t in office anymore. On Jan. 13, the US House of Representatives impeached Trump; this was just a week before he left office. He was impeached on one article of “incitement of insurrection.” Kevin Breuniger from CNBC states, “The article accuses Trump, who held a rally outside the White House shortly before the riot began, of making statements that encouraged — and foreseeably resulted in — lawless action at the Capitol.” This event that Breuniger is speaking of is the raid on Capitol Hill that took place on Jan. 6, 2021. Many believe that the rally Trump held right before the raids was the reason that so many of his supporters marched to the Capitol. This raid resulted in five deaths including the death of one Capitol police officer.

The trials for this impeachment start on Feb. 9, more than a month after the events at Capitol Hill. For Trump to be impeached the Democrats will need 17 Republicans to vote for the impeachment. The prosecutors in the case were chosen by House speaker Nancy Pelosi. House representative, Jamie Raskin, agreed to be the lead Impeachment manager and prosecutor. Trump’s legal team will be led by Bruce Castor Jr. and David Schoen.

Many senate members are hoping the trials will not take as long as the last trails took. Trump’s last impeachment trials lasted nearly three weeks. This could not happen though because it is likely that the impeachment managers will call for witnesses or experts to testify which could make the trials last longer. In the end the justice for those killed at the Capitol raids needs to be served and this trial might just be the way to do so.