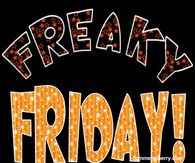 Last week, Hamilton held auditions for its upcoming musical Freaky Friday. The cast list was posted on November 6, revealing that Jessica Wastchak would be playing Katherine, and Kristiana Corona would be playing Ellie.

The musical is about a mother (Katherine) and a daughter (Ellie) who magically switch bodies overnight. Paired with its catchy songs, great acting, and interesting characters, Freaky Friday’s humorous storyline is bound to entertain both students and parents.

“The auditions were stressful and a little nerve wracking,” Lindsay Dussault, a junior in the Hamilton theater department told the Husky Paw Print. “I am very excited to be in a production again, though. Especially since we didn’t get to perform our show last year because of covid.”

Dussault will be playing both Ms. Time and Cater Waiter in the upcoming production and around 30 other actors and actresses are set to have roles. The complete cast-list is posted on Hamilton Theater’s instagram page, @hamiltontheatrecompany.

Freaky Friday won’t premiere until mid-April of 2021, but rehearsals and preparations for the musical are still very much underway. The Hamilton Theater Department is also working hard to prepare for its upcoming Holiday Show, which will be performed much sooner than Freaky Friday in December of 2020.