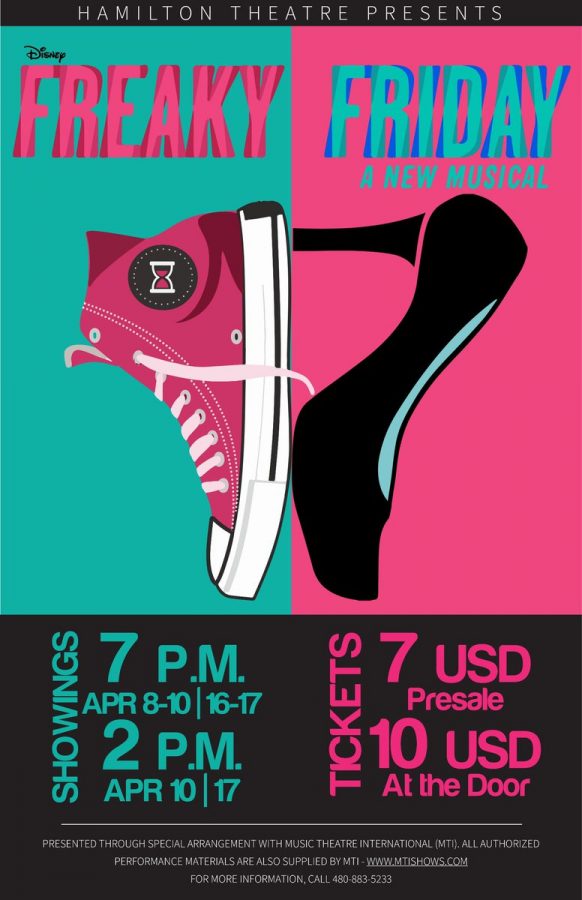 Last Thursday, Friday, and Saturday, Hamilton Theater Company performed their musical “Freaky Friday” in the school auditorium. The show tells the tale of a spunky, rebellious teenage girl (Ellie) and her strict, uptight mother (Katherine). During a petty argument, the two accidentally break a magical hour glass and switch bodies. Chaos and drama ensue as they each try to carry out the other’s routines and switch back to normal.

Unlike most shows performed in Hamilton’s auditorium this past year, all of the actors and actresses had clear masks, so their faces could be seen while they sang and acted. Microphones and large set pieces were also used, a stark contrast from “Night of Scenes” and “Holiday Show”, which were performed without any.

Audiences members were all required to wear face coverings and maintain social distancing. Many seats were left empty to keep space between the people in the audience, though small groups that came together were allowed to sit with one another without any seats in-between.

Makenzie Williams, a junior at Hamilton, was among those that attended the musical and sat in the audience.

“I think the story of the musical is better than the movie.” She told the Husky Paw Print after the show. “Since Katherine was planning a wedding and was a business owner, Ellie ended up being under more pressure. And I liked that instead of Katherine needing to fake playing guitar, she had to participate in a high school event.”

Lindsay Dussault, another junior at Hamilton, performed in “Freaky Friday” and enjoyed the production thoroughly.

“I was Ms. Time, as well as a few ensemble roles such as Cater Waiter, student, and wedding guest.” Dussault explained. “We have been rehearsing this show since November of last year, almost six months ago, and it was fun to see everything come together. Behind the scenes, the cast and crew become a kind of family because everyone is doing their best to try to make the show as great as possible.”

If you are interested in seeing “Freaky Friday, the cast will be performing the musical again this Friday (April 16) at 7 pm and this Saturday (April 17) at 2 pm and 7 pm. Tickets are $7 if you order in advance and $10 at the door.