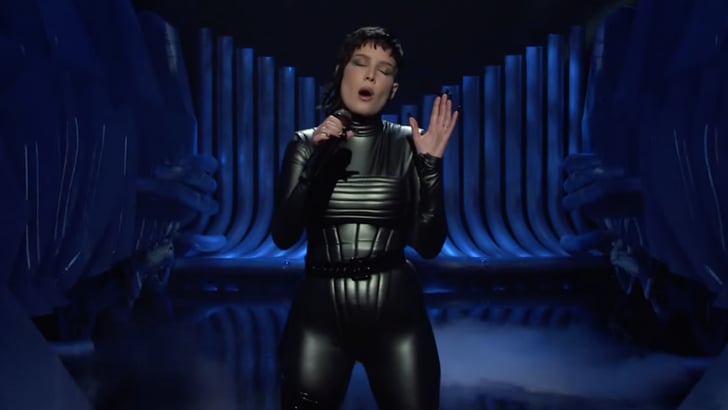 In their first performance after the birth of their first child, Halsey brings a futuristic look to the Saturday Night Live stage in their performance of “I’m Not a Woman, I’m a God.” They also performed the song “Darling” with the artist Lindsey Buckingham. This isn’t the first time that Halsey has performed at SNL either, this show marking it as the fifth time that they’ve taken the stage there. Luckily, the artist didn’t fall into the trap of repetitiveness, and instead takes on a shocking look to debut their song.

No one was prepared when they took the stage that day, but in a good way! The costume was a leather skin tight bodysuit, varying from matte and shiny shades of black. It was only made better by the hairstyle they chose; a bob made asymmetrical by the left side being shaved off. Most people reviewing the show described the look as completely futuristic and powerful, a fitting look for the song that was chosen to accompany it. They brought out the song “I’m Not a Woman, I’m a God” from their newest album “If I Can’t Have Love, I Want Power.”

Following that energetic selection, they showed that they know how to close out a performance by bringing in former guitarist for Fleetwood Mac, Lindsey Buckingham. There wasn’t as much production as the completely sci-fi set of their previous song, but it proved to be a brilliant artistic choice to go completely acoustic. Using just their voice, they made their rendition of the song “Darling” a powerful moment to end on.

Afterwards, Halsey took to social media to give fans their thanks for supporting them, and looked back on the journey that got them to SNL so many times. They also expressed a concern about the performance not standing out from all their other work, but most reviews are commending them for their originality and  creativity. If you want to see for yourself, the performance is out on many platforms like SNL and Youtube!