Slipknot Shakes up Phoenix with a Local Concert 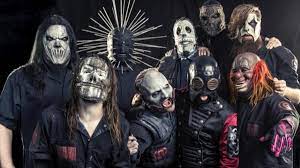 On Tuesday, Slipknot and several other major headliners performed at Ak-Chin Pavilion in Phoenix! The other headliners included Killswitch Engage, Fever 333, and Code Orange. Together they created a massive setlist that featured some of their biggest songs like “All out Life,” “Wait and Bleed,” “Surfacing,”  a cover of the AC/DC song “For Those About to Rock (We Salute You)” and many more! Even though the concert hit some road bumps, it continued to be a fun night.

Slipknot is an American heavy metal band that originates from Iowa. The percussionist Shawn Crahan, bassist Paul Gray and drummer Joey Jordinson came together to transform punk rock music into a band that has gone on tour several times, released huge albums and won the grammy award for Best Metal Performance. Even through losing one its founding members in Jordinson, and gaining another Corey Taylor, the band continued to gain traction and popularity.

Metal fans have a reputation for being rowdy, and this concert proved to be no different. The beginning of the concert went smoothly, slipknot fans expressing their usual level of excitement for the band. They made it through much of their setlist before the beloved song “All out Life” began and a member of the crowd decided to set a shirt on fire and wave it around. It was fine with that one fan, but soon others around them joined in and started burning lawn chairs and other flammable things on the open lawn section of the venue. The fire raised so high, the performers were forced to stop the music until the fire department could contain the fire. Luckily no one was hurt in the bonfire, but the time it took to contain the fire took 30 minutes off the set list and they were forced to cut “Duality” and “Spit it Out.”

The songs being cut didn’t ruin the rest of the concert though, and they were even able to fit in encores of a couple songs like  “Surfacing” and “Until We Die!” Unfortunately there aren’t professional recordings of the concert, but you can always count on concert goers to record parts of it which can be found all over social media. Luckily, they didn’t perform any exclusive songs, so major fans will still be able to hear the music on all streaming platforms!