Silk Sonic is Back With a Performance of Their New Song! 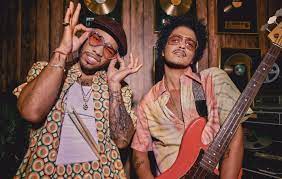 Four days ago, Silk Sonic dropped the official music video for their song “Smokin Out The Window.” This is the second song that’s been dropped under the name Silk Sonic, the first being their debut single “Leave the Door Open.” After these two singles, it’s safe to say that people are excited for the album they’ve announced is in the works!

Silk Sonic is an R&B Duo created by Anderson .Paak and Bruno Mars, both successful R&B artists who have now come together to create their “superduo.” Bruno Mars is a very well known artist, one who doesn’t stick to one genre with his music but adds his same brand of soul to all of it. Over his years in the music industry he’s proved himself to be a power force.

The other part of the duo is Anderson Paak, a musical force in his own right. He is a rapper, singer, songwriter, record producer, and drummer so there’s no shortage of talents to bring to the table. These two artists combined their love of retro showmanship and their songwriting abilities to release their hit single “Leave the Door Open” and now “Smokin Out The Window.”

The Performance in the music video is a throwback to old R&B music, and they pull out all the stops in showing it. In the video they have old school brown suits on, a retro mic setup, and the dance moves to match. To top it all off, the editing of the performance features close ups and transitions from before our time too.

Fans have received this song the same way they did their debut: with so much excitement! Some have expressed their enjoyment of seeing their style of music brought back, and others have only just discovered it, but most fans are united in their love for the duo. After this, they’ve also gotten even more excited for the release of their album in the works, “An Evening with Silk Sonic,” which has been announced to release sometime in November. If you want to see what all the hype is about, the video is on Youtube!