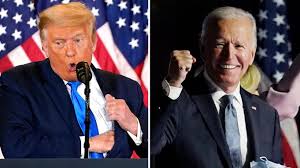 On Saturday Nov. 3, we found out who the President of the United States will be for the next four years. It was a close race that came down to Penslyvania, Georgia, Nevada and Arizona. In the end, Joe Biden won the 2020 presidential election.

On Tuesday Nov. 3, Election day in America started. Some states’ election results started flooding in at around 7 p.m eastern time. In the beginning, most votes were from states like Florida, Indiana and Kentucky. By eight p.m states like Vermont, West Virginia, Delaware and Alabama had already been called by most major news stations. By the end of the night most stations had called at least 30 states as either blue or red, giving their electoral votes to the respective candidate. At the end of the night the source, 270 to win, had Democratic candidate Joe Biden with 210 electoral votes and Republican candidate Donald Trump with 166 electoral votes.

The election went on for another five days until a candidate was finally announced. In the meantime Joe Biden and Donald Trump spoke publicly. At 12:30 p.m. on Nov. 4 Biden spoke to the country and urged them to stay calm and for states to continue counting every vote. At 2:30 p.m. on Nov. 4 Donald Trump stood at the White House and addressed the country and announced that he was going to file a lawsuit against the states: Michigan, Wisconsin and Georgia. Trump stated, “We’ll be going to the US Supreme Court, we want all voting to stop. We don’t want them to find any ballots at 4:00 in the morning and add them to the list … As far as I’m concerned,we already have won this.” On Nov. 5 Trump had another Press conference with reporters where he continued to confirm his past statements about the lawsuits he would file. Biden did not speak formally on Nov. 5 but did talk to reporters and calmly said “Democracy is sometimes messy.”

On Nov. 7, major news networks such as Fox News, CNN, MSNBC and The Associated Press projected Biden winning the state of Pennsylvania, thus putting him past the 270 votes needed. Biden was named the new President Elect with 273 electoral votes. It was also determined that both Biden and Trump exceeded Barack Obama’s 2008 record of 69,498,516, for the most popular votes in the Presidential Election. With Biden and Kamala Harris’s projected win it was the first woman and person of color elected as Vice president. Many of Biden’s supporters gathered in multiple cities and celebrated his predicted win. That night Biden and Harris spoke at the Chase Center in Wilmington, Del.. There Biden claimed, “With the campaign over, it’s time to put the anger and the harsh rhetoric behind us and come together as a nation.” Trump has yet to concede and instead has been coordinating the legal proceedings that he has decided on. With the election seemingly over many politicians agree that it is time to prepare for the next four years with Biden as president. As of Thursday Nov. 12, Arizona was annoyed to go blue for the second time in seven decades. In all, the 2020 election was a mess of votes, lawsuits and arguing, but at least it matches up with all the other crazy things happening in 2020.