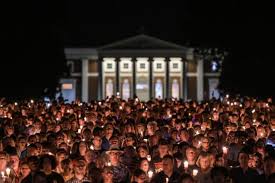 President Trump stunned newsmakers, journalists, and political analysts on Tuesday when giving a press conference at Trump Tower. When the press asked what his take was on the Alt-Right (right wing political party), he thereby defended the alt-right in Charlottesville. The protests in Charlottesville have been between the “Alt-Right” and the “Alt-Left” parties. Alt-Right defending the confederate political side and supporting “white supremacy” as so the media calls it. Trump drew comparisons between the two groups and stated how both groups had a fair, equal amount of violence coming from both sides. This sent the “Alt-Left” to exploit Trump all over the media. Politicians, news reporters, and even students have varied opinions on Trump’s statements. When Kana’i Kuikai (12) from Hamilton High was interviewed on the subject, he stated “I can’t believe it’s our President talking. He should have taken into account what caused all the riots in Charlottesville to begin with.” He then went on to explain how it is a travesty among the position of a highly regarded profession.

The substance of Trump’s unscripted remarks fell more closely to his initial reaction to Charlottesville on Saturday, when he stated “many sides” were at fault for what happened. On Monday Trump gave a stronger statement, saying “racism is evil” and specifically condemning white supremacists, the Ku Klux Klan, and neo-Nazis. Speaking to reporters shortly afterward, white nationalist Richard Spencer told reporters he didn’t see Trump’s remarks as a condemnation of his movement. Allison Lozza (12), another student from Hamilton High said, “His failure to address racism effectively since the beginning of his campaign has only fueled the fire, creating more problems and undoing any general improvements made in the amount of racism present in the country.” Many students sided against Trimp, for example, Hamilton student Chris Lee (12) said, “Trump has a constant act of speaking his mind without exactly giving it a thought before hand. I believe trump has good intentions. So those good intentions will eventually pull through.” Overall, the remarks had a great amount of backlash and many are anxious to find out what will happen or be said from here on out.