“From Memory to Hope: Our Story” 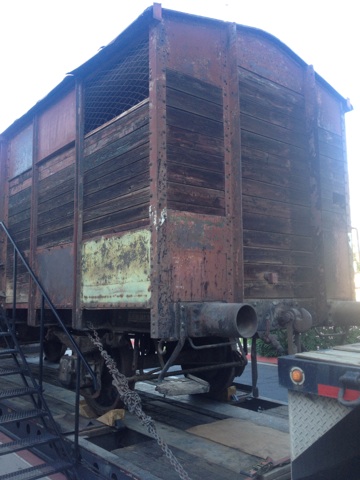 A Holocaust-remembrance event took place on Tuesday, April 8th at the Chandler Center for the Arts. The event was put on by the East Valley Jewish Community Center that featured a Holocaust-era rail car, guest speakers including survivors and liberators as well as informational presentations.   One of Hamilton’s most beloved teachers, Mr. Ed Hermanski, is a big supporter of the JCC and the railcar exhibit. When asked why he volunteers so much, Hermanski responded that he feels “the Jewish community has been prosecuted enough, and historically speaking when it comes to the Holocaust there are so many lessons that can be learned from that.” He volunteers not only with events like this, but is a big supporter of a new Holocaust remembrance museum that is in the process of being erected right next to the JCC on Alma School and Ray Road. The museum will hopefully be up within two to three years.

Mr. Hermanski is also a recipient of the Shofar Zakhor Award, presented to him by the Phoenix Holocaust Survivors’ Association. He is the only non-Jewish recipient in the state of Arizona, and won the award for his extensive work with Holocaust survivors. “I decided to volunteer to help and then fell in love with the people down there, all the good people, the way they treated me, all the good things we do, the fact that we’re going to build a Holocaust museum, that we bring in veterans, and that the Jewish community supports all religions and all races,” Mr. Hermanski says of his volunteering with the JCC. He worked closely with this specific remembrance event by interviewing the liberators on stage and getting to help them go through emotional experience of viewing the railcars again. He reported the event as very successful, and thanked Mrs. Holly Kain, an AP Human Geo teacher here at Hamilton, for her wonderful work alongside the JCC as well. “You couldn’t help but leave being a better person,” Hermanski concludes.

Hannah Isaac, 11, also attended the event along with members of her Jewish youth group. “It’s really important that all people, students especially, go and see these Holocaust speakers and people who liberated the camps just because they’re not going to be around for much longer,” she says. “When you go to these remembrance things you have history living right in front of you.”

Hannah, and other members of the local Jewish community urge people to attend these events often, even if they are not Jewish. The most moving part of the night for Hannah was when she went to view the rail car and an older gentleman had trouble going in. “He said, ‘I won’t go in. I’ve already been in once.’”

A viewing of a Holocaust-era rail car was free and available from 4:00-6:30pm, and a Naturalization Ceremony, also free, took place starting at 5:00pm. Directly following the Railcar display, Leo Hymas and Fletcher Thorne-Thomsen spoke of the liberation. Our Story, the headlining event, started at 7:15, and was followed by a Q&A and book signing.By having remembrance events often and educating people as much as possible, we make sure an awful past like this won’t repeat itself. This event in particular is especially relevant, as the Jewish holiday Yom Hashoah, Holocaust Remembrance Day, takes place on Sunday, April 27th.