Hamilton Football Varsity Team gets its First Win of the Season 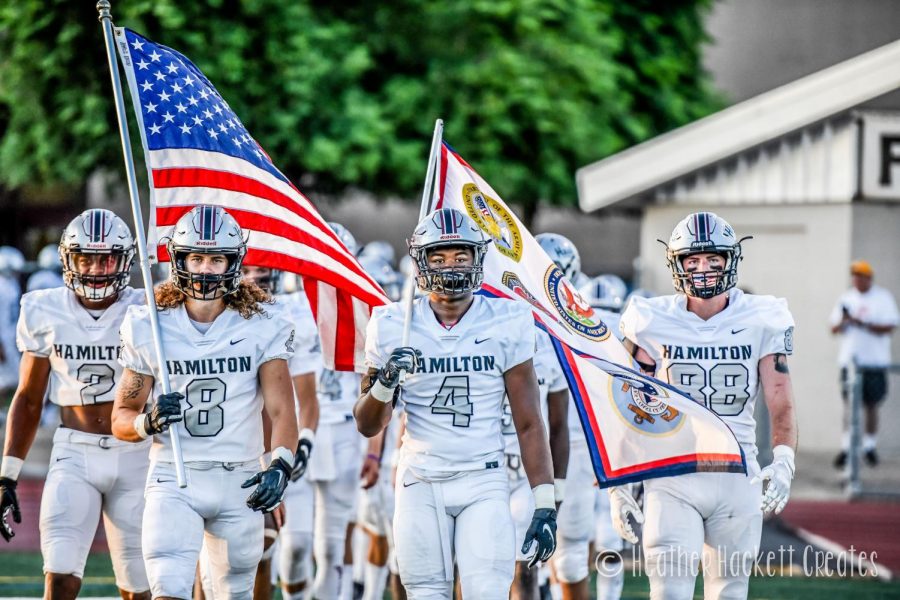 The Hamilton Football Varsity Team kicked off their 2019 season at Chaparral this past Friday, and they pulled out a victory with a final score of 44-21. This was a big statement win for the Huskies after losing to Chaparral in overtime early last year.

Senior Nick Arvay, a quarterback for the Huskies, had a fantastic night completing 20 out of 24 passes for 258 yards and two touchdowns, with one of his passes being a 67-yard completion to wide receiver Senior Brenden Rice. Rice also began his season on a great note as he had six receptions for 150 yards and two touchdowns. Running back, Sebastain Dorman (12), had a successful night on the ground as he rushed for 101 yards and two scores. With the offense firing on all cylinders to start the year, Christopher Esparza (12) is excited to see “how the team will grow as the season progresses.”

The defense had a terrific night as well, as they were able to keep the Firebird’s offense scoreless for the first quarter of the game. Chaparral quarterback and Ohio State commit, Jack Miller, faced constant pressure throughout the night, as there were multiple occasions where he was pressured and had very little time to throw the football. Senior linebacker Jeremiah Trojan helped lead the team with six total tackles and two quarterback hurries. Despite having two rushing touchdowns, the defense managed to hold Chaparral running back Jared Williams to only 51 rushing yards. Jacob Gonzales (12) was very impressed with the defense as they “showed great charisma and discipline” for their first game of the season.

Overall, it was a dominant performance by the Hamilton Huskies and one that people like Mr. Ring believe “will help the team build momentum for the rest of the season.” The Hamilton Football Team will take on the Highland Hawks in their home opener this Friday at 7:00 pm. #GoHuskies!