Hamilton Puts Up a Fight in the Battle for Arizona Avenue 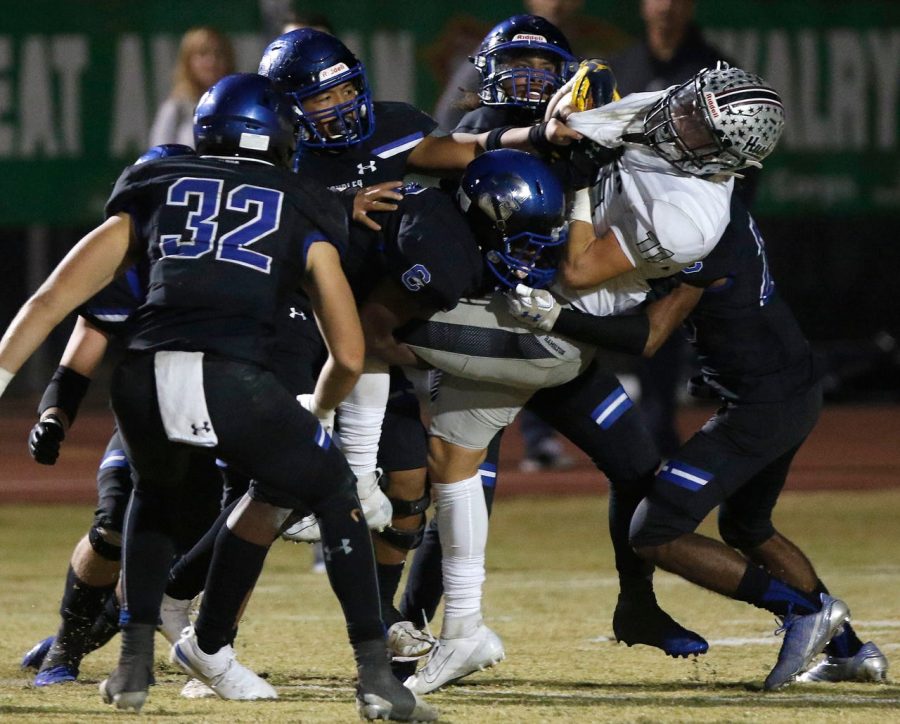 Credit: DARRYL WEBB/SPECIAL FOR THE REPUBLIC

The Hamilton Football Varsity Team lost against the undefeated rival Chandler Wolves in the battle for Arizona Avenue by a final score of 42-38. The Huskies played their hearts out all night and had a chance at the very end to win the game, but unfortunately came up a little bit short.

The momentum was on Hamilton’s side for the majority of the first half, as they were at one point up 21-7 in the second quarter. Senior quarterback, Nick Arvay, was on fire in the first half as he threw two touchdown passes, with one being a 50 yarder to senior wide receiver and outside linebacker, Brenden Rice. He also added a 44-yard rushing touchdown to go along with his terrific performance. The defense did not allow Chandler’s offense to gain much momentum in the first half as the Huskies constantly forced the Wolves to go three-and-out. Senior defensive end, Alex Wielert, made a tremendous play for the Huskies as he recovered a fumbled snap by the Wolves and returned it all the way for a 71-yard touchdown. Christopher Esparza (12) commented on the performance of the team by noting how he was “thrilled to see the Huskies get off to a great start” especially in one of the most anticipated games of the season.

The defense stayed hot as Chandler’s offense was driving at midfield late in the third quarter when Wolves junior quarterback, Mikey Keene, chucked the ball and the pass was intercepted by senior defensive back, Jamar Brown. Hamilton continued to put points on the board as Arvay threw a 12-yard touchdown strike to junior wide receiver and defensive back, Brady Shough.

Although Chandler trailed by 14 points in the fourth quarter, the momentum slowly shifted onto their side as Wolve’s senior running back, Daveon Hunter, broke loose for a 54-yard rushing touchdown. Hamilton was forced to punt their following possession and found themselves in a tough position as Chandler blocked the punt and recovered the football on Hamilton’s 27-yard line. They would proceed to score on that drive and suddenly the Wolves were back in business. With their backs against the wall, the Huskies marched down the field and kicked a field goal to make the score 38-35 with two minutes left in the fourth quarter. However, Chandler was able to quickly score a touchdown and left Hamilton with 17 seconds left for a miracle drive. Hope was not lost as Arvay launched a pass to Shough that was somehow caught between a cluster of Chandler defenders. A roughing the passer penalty put the ball at the 2-yard line with zero seconds left, but unfortunately, the pass by Arvay sailed high over the end zone and Hamilton was left stunned. Linebacker Irra Sarmiento (12) was disappointed over the loss to Chandler but believes that the team can ultimately make it to state if they continue to “keep grinding and maintain focus” heading into the playoffs.

Overall, it was a thrilling end in the battle for Arizona Avenue and one that will be remembered for many years to come. Hamilton certainly showed what they were capable of as they were the first team in three weeks to score 35 points on Chandler. Although it was not the outcome the team was looking for, running back Sebastian Dorman (12) hopes that the team can “continue the same mindset they’ve had all season” and not let this game negatively affect their performance moving forward. The Huskies will look to rebound on the road next Friday, November 15th, at 7:00 pm in their first playoff game against the Centennial Coyotes. #GoHuskies!