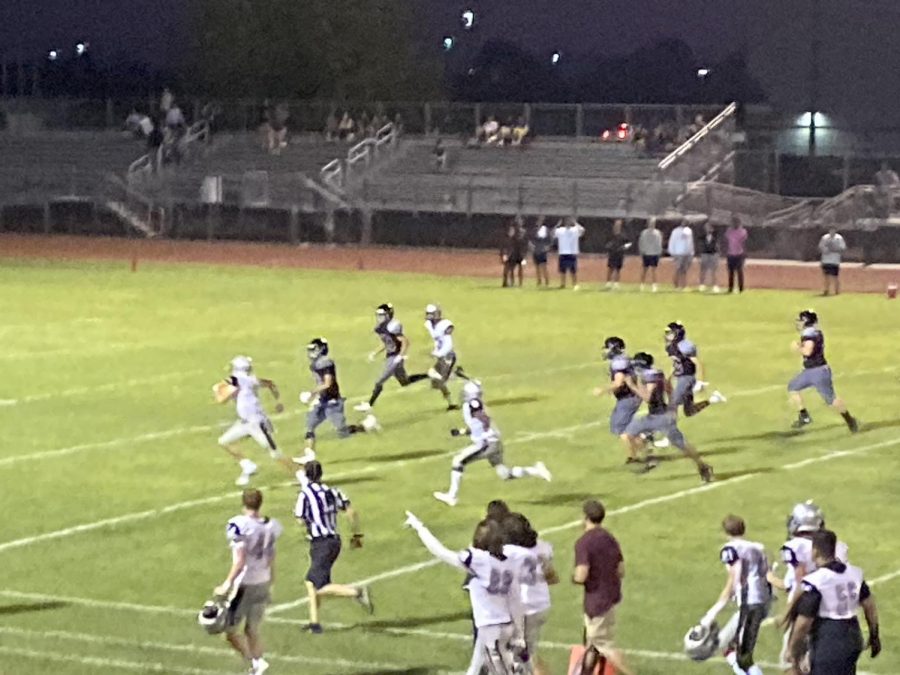 The JV Hamilton football team is off to a great start as they celebrate a victory in their first game of the season on Sept. 2, 2021 at Desert Ridge High School.

The Huskies scored very early in the first quarter and took the lead. In the second quarter, another touchdown was made. With the extra point good, the score becomes 14 to zero. Later in the game, Xavier Newman, the quarterback of the Huskies, was hit from behind and fumbled, however; Chinua Hadson-Taylor recovered the ball. Newman ended up redeeming himself by running the ball 40 yards and obtaining a first down. Unfortunately, another false start was called on the Huskies, this was the team’s second penalty in the first half. Yet another touchdown was made by Jackson Finefrock, bringing their score up to 21 to nothing. The Jaguar team also ended up getting a first down in a 50 yard gain, however the Huskies stopped the Jaguars from scoring a touchdown on the second yard line before half time.

With the second half of the game beginning with a kickoff to the Jaguars, they step up their game and get two first downs in a row. Alas, the Huskies make yet another penalty by being offsides, this gives the Jaguars another first down. With this reality set in stone, Frinefrock proves himself worthy again by making an incredible interception and an 85 yard return for a touchdown. With the extra point good, the Hamilton score goes up another seven points. The Jaguars end up fumbling the ball in one play, and struggles but succeeds in recovering it with a price of lost yards. With no other choice, Desert Ridge makes the decision to go for it on fourth down but does not succeed, and Hamilton’s Beckham Pellant runs the ball for a 40 yard gain, first in goal. Another Husky touchdown is rewarded thanks to Pellant’s brilliant run, and the score becomes 25 to zero. A 30 yard run and first down by the Jaguars begins the third quarter of the game, and a well deserved touchdown made by the Jaguars’ this makes the score 35 to six. However, this is not enough to keep the dogs inside, for a hand off to Willem Nilan and a 70 yard run for a touchdown brings the Husky score even higher. Because the Jaguars turned over the ball on down, the most exciting part of the game goes underway. A flubbed punt is made and a safety on the Huskies gives the Jaguars two extra points and the possession of the ball. Luckily, a redemption is made and Nilan gains a 65 yard run and makes a touchdown with the extra point good. Elliot Woods also becomes well respected by recovering a football after the Jaguar quarterback fumbles it. The final seconds of the second half concludes the game with an impressive victory of the Hamilton Huskies with a score of 49 to eight.