Huskies Rain on The Thunder’s Parade 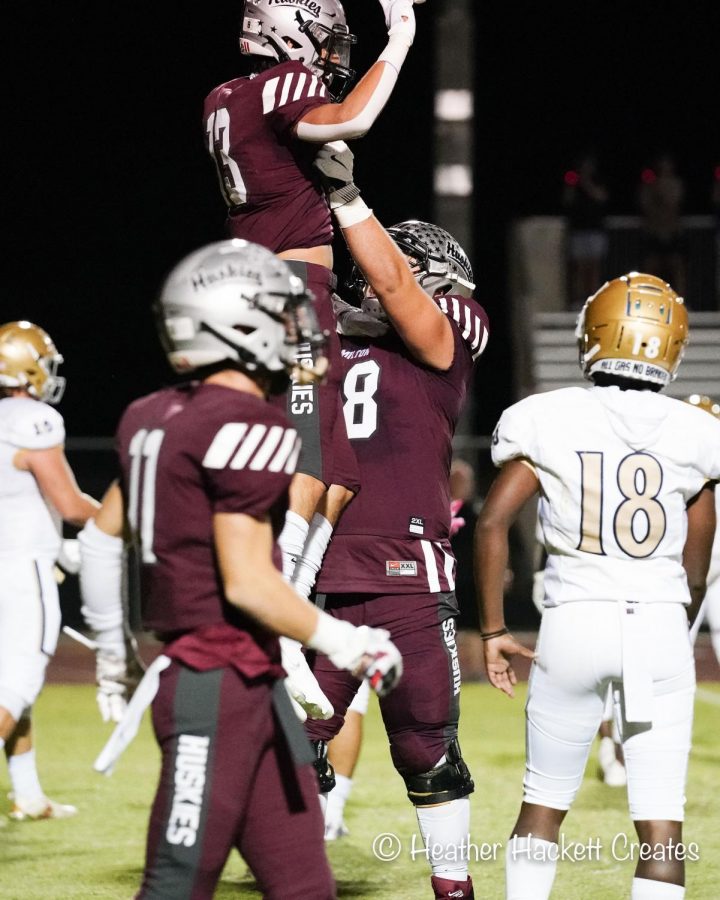 The Huskies were able to cruise past the Desert Vista Thunder in Friday’s game. The final score was 63-17, making the Hamilton Huskies Varsity football team’s record 7-0.

This Hamilton game concerned everyone at first when receiver,Jaxon Haynes, fumbled on the first play and Desert Vista hit a field goal. This was proven a fluke drive when Hamilton marched down the field and Nicco Marchiol rushed the ball into the endzone. As usual, Matthew Krneta would walk onto the field and drill the extra point. From then on it was all Huskies. Each time they would touch the ball they would score. Out of all 11 drives, the Huskies would punt only twice. The stadium was rocking when touchdowns started raining from the sky, and defensive stops were popping up almost every drive. Ultimately, Desert Vista did not stand a chance, and the Husky football team would keep their perfect record.

There were many notable players in this showdown. Marchiol threw 23 for 31 resulting in 333 yards. These 333 yards passing resulted in five touchdowns. His longest pass was a 49 yard pass to Breylon Blount who would find his way into the endzone. Impressive stats for the senior QB1 (Hamilton’s starting quarterback). I feel like we always see this duo of Christian Anaya and Marchiol filling up the stat sheet. This game was not any different. Anaya charted nine receptions and three touchdowns (TD’s.) These stats would put Anaya comfortably over the 50 reception mark on the season, and his three touchdowns put him just over the 10 touchdown mark. In rushing, Nick Switzer had an incredible game. He would end up with seven carries for 115 yards and two touchdowns. In Switzer’s longest carry, he shoots the gap and displays a burst of speed resulting in an 81 yard touchdown. He could not have done that without the crucial blocking up front from Grayson Stovall and the rest of the offensive line.

The defense was balling out as well. They held the Thunder to 17 points which is outstanding considering Hamilton scored 63 points. The notable performances came from the usual suspects who are Russell Davis II (Deuce) and Timothy Weddell. However, the entire D-line was solid and the linebackers played well too. The secondary did well, but they did not stand out. The defensive line including Dawson Hubbard, Deuce and Chandler Davis racked up three  total sacks and even more tackles for loss (TFL’s). Individually, Deuce had two TFl’s, one sack and eight total tackles. The final important individual player was Weddell. He had 13 tackles, one TFL and recovered two fumbles.