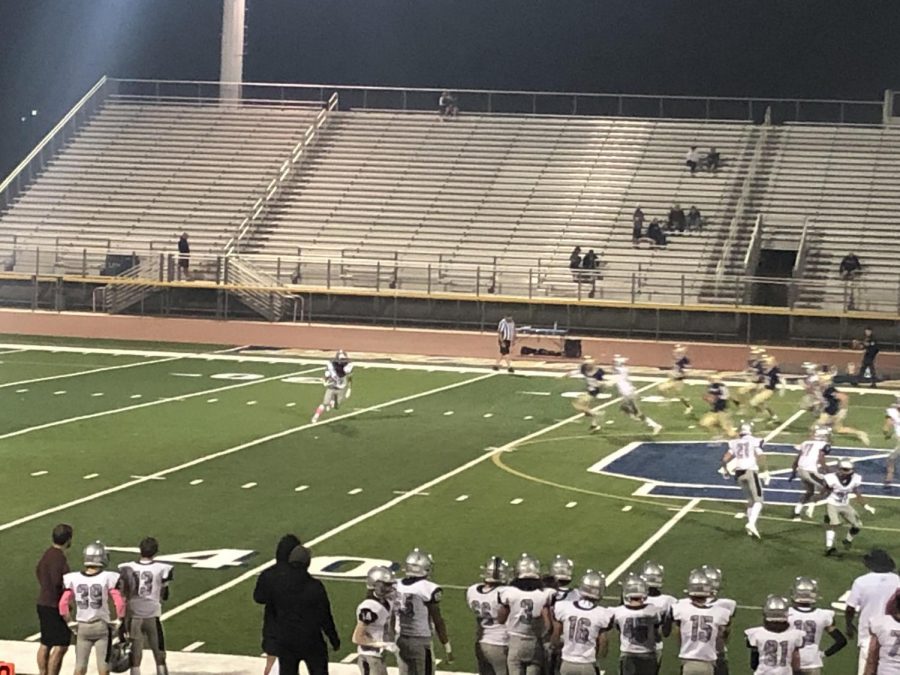 The game against the Desert Vista Thunder on the Thursday of last week resulted in another Husky win.

This away game was considered an easy win for the Huskies, and in the start of the game, Diego Raigosa caught a touchdown pass. Carter Kelley also intercepted the ball in the beginning giving the Huskies a big advantage. However, their luck stuttered when a bad snap occurred and Xavier Newman was almost sacked on third down. Testing their luck one more time, the Huskies went for it on fourth down gaining just enough yardage for a first down. Eventually, another Hammy touchdown was made, and Desert Vista got the ball back. Two penalties were called against the Thunder hindering the Thunder offense. These two penalties were big contributors to the reason the Thunder had to punt the ball on fourth down, ultimately giving the pigskin back to the Huskies. Unfortunately, they got the ball back when the offensive line continued to let their guard down, causing Newman to get sacked twice.

With the second quarter underway, the Huskies came out strong and a Thunder turnover was forced. Ryan Kapis received an incredible 20 yard pass which led up to Beckham Pellant who scored his first touchdown of the game on this drive. Many flags were thrown against Hamilton during this quarter, preventing Jackson Finefrock’s touchdown from counting and resulting in another Husky turnover. Later in the quarter, Jack Lewis redeemed his teammates by receiving another touchdown for the Huskies.

The second half began with the Thunder moving down the field, but they were still unable to get past the 17-yard line. Hamilton also moved down the field, however multiple penalties were called against them which made it difficult. Avery Knight took a handoff and got the Huskies within 10 yards of the goal, making it first in goal for the Huskies, and Pellant earned his second touchdown of the game. Later in this quarter, Newman took a keeper gaining just enough yardage for his team to make it a manageable fourth down. However, a bad snap forced Newman to get sacked and the Thunder started on the 45 yard line.

Desert Vista was powerless against the scoreboard and felt pretty hopeless. Although  out of pure luck, a touchdown and a two point conversion was made for the Thunder. This was not enough to get the Thunder going though. The Huskies even fumbled the ball, but Desert Vista didn’t seem to be able to keep possession. The Huskies made one more field goal and a touchback. The final followed shortly after concluding the game with a score of 40-8.

Another away game for Hamilton will be taking place on Oct. 28, 2021 at 6 p.m. against Highland High School. Will the Huskies get another win added to their streak, or will it be “hawkward” when they don’t?