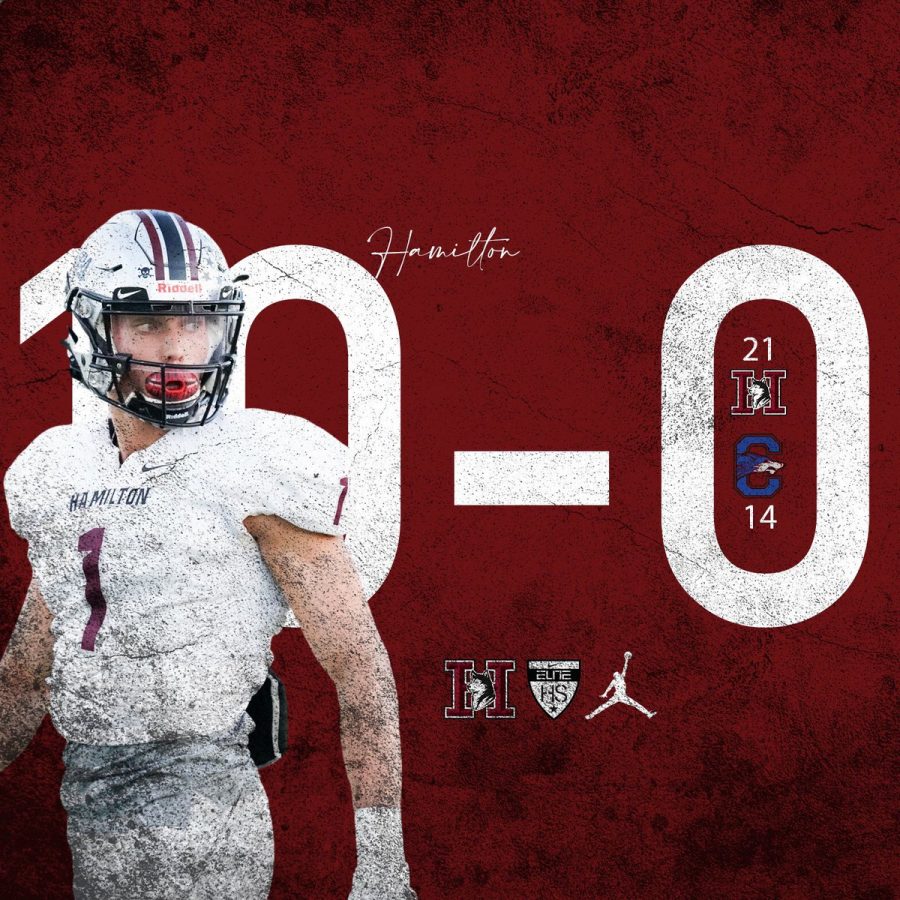 The biggest showdown of the season took place on Friday. It was a back and forth game until the end where Hamilton emerged victorious with a score of  21-14 which snapped Chandler’s 45 game win streak.

The game started off with Hamilton receiving the kickoff. The first drive of the game will be short-lived as the Huskies go three and out. After they are  forced to punt on fourth down,Chandler takes the field, and Without  hesitation, Blaine Hipa drops back and throws a 60 yard bomb to Kyion Grayes for the opening touchdown. The extra point also flies right through the uprights making it 7-0. Hamilton gets the ball back and looks to gain a little bit of momentum when they gain a pair of first downs.One by the grace of Nicco Marchiol’s feet. Hamilton later gets stopped on third down and five, forcing another punt. When Chandler gets the ball back they get stopped again. After a bad play and a bad snap, Chandler is tasked with a third and long. Luckily, the Huskies sacked the quarterback and forced Chandler to punt.  After an unsuccessful first couple of drives, Hamilton needs to cash in. The Huskies do, on a five yard pass and catch from Marchiol to Christisan Anaya. After the extra point, it was even at seven. Chandler wasted no time following the kickoff from Hamilton. After a couple of plays, Hipa threw a 50 yard dime to Quaron Adams for a touchdown. The extra point went through and the score was 14-7 at the quarter break. The second quarter began with teams exchanging punts. When Hamilton got the ball back on the third drive of the quarter, they gained a lot of momentum and ultimately earned their second touchdown of the game. This second touchdown comes from a 16 yard run at the feet of Logan Krei. The last nine minutes of the half were very bland; it was just the team’s exchanging punts.

When the opposing teams took the field after the half break, no team could gain an edge. The third quarter was a grueling, dogfight between the Wolves and the Huskies. Chandler would make big plays here and there typically on long passes. The third quarter was gritty and nothing came out of it. As the fourth quarter dawned upon these teams, both of them were ready to win the game. This quarter was very notable. Hamilton waltzed their way into the red zone after a big run from Krei. The stadium started rocking until a fumble was recovered by Chandler. This put Chandler on their own 16 yard line. The Wolves find a new sense of momentum after recovering a fumble and getting a red-zone stop on Hamilton. On first down, Hipa completes another long pass to Adams. This put Chandler on their own 40 yard line. This woke up the Husky defense, Deuce Davis who was having an incredible night, found his way to the quarterback and he forced a fumble. The fumble is scooped up by Dawson Hubbard who takes it all the way to the seven. Marchiol finds Trè Spivey for a touchdown. This gives Hamilton their first lead of the game. Ultimately the Huskies hold the Wolves for the last bit of the game. Hamilton snaps the 45 game win streak and gets the trophy of Arizona Avenue.

Hamilton wins the game 21-14 reclaiming the trophy of Arizona Avenue. They secured the number one spot in all the state rankings of  Arizona.  They have a week off before they start to compete for the state trophy.