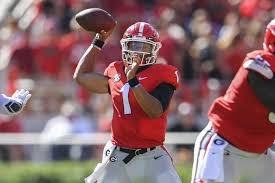 As the college football season wraps up, the time for players to transfer to other schools has begun. Of these players, none get more attention than the group of quarterbacks. This position is extremely important to the team, so it’s a big deal when a fresh, new face decides to commit to a seperate team. Typically, a player this important would decide to leave the school they committed to because of playing time issues or just problems fitting in with a certain scheme or coach. This year is no different as there are plenty of quarterbacks that are making a huge impact with their transfer.

One name that is certainly poised to have an impact is Jalen Hurts transferring to the University of Oklahoma. Once the leader of an Alabama team that almost won the national title, Hurts lost the starting job to rising star, Tua Tagovailoa, and stayed an extra season last year to serve as the back up. Now Hurts has the ability to go start for Lincoln Riley and the Sooners that are poised to make another playoff push. For Hurts, this decision couldn’t have been easy, but when you look at Riley’s resume with quarterbacks like Baker Mayfield and Kyler Murray, who both won the Heisman Trophy, Hurts decided that Oklahoma would put him in the best position to succeed. Jack Nichols (12) commented on the impact Hurts can have on his new team saying, “Yeah, I think he can really help this team that is already really good. Without an experienced quarterback ready to take over, Hurts can provide a team with a pedigree and demeanor that screams national champion. He did really good at Alabama and expect him to keep that up with Lincoln Riley at Oklahoma.” Every Sooner fan hopes Hurts can be the one to take them all the way as they’ve come up short the past few years.

Another huge name that left one prominent program for another is Justin Fields leaving the University of Georgia to transfer to Ohio State. Fields, the second best quarterback in the 2017 recruiting class, was playing behind sophomore sensation Jake Fromm that took Georgia to the national championship as a true freshman. Considering that Fromm has another year of eligibility until he can declare for the NFL Draft, Fields was likely to sit on the bench for another year. For a player with that much talent, it would be a shame to watch him waste it as the backup, so Fields thought it would be best to find a new fit somewhere else. That place is at Ohio State which had a down year that didn’t live up to their high expectations that included plenty of controversy which led to longtime head coach Urban Meyer retiring. Offensive coordinator Ryan Day has officially taken over and Fields gives him a talented quarterback that can help win their first title since 2015. Joshua Wright (12) loves the fit between this school and quarterback saying, “Fields fits in really well with Day’s scheme that involves a more mobile quarterback leading the offense. I think he is really good, but wouldn’t have started at Georgia until 2020, so now he has a chance to compete for a Heisman trophy and national championship at Ohio State.” For a team looking to head back into the playoff picture, a great quarterback like Justin Fields is a helpful start.

One of the more forgotten transfers that occurred last year was Jacob Eason leaving Georgia for the University of Washington. Eason’s story perfectly depicts the fall of a great hero searching for redemption at a much smaller school. The five star recruit showed high potential during his first year at Georgia, starting twelve games while showing elite arm strength and precision accuracy. His sophomore was marred after going down with a leg injury and was superseded by current starter, Jake Fromm. With no chance of winning back the starting job, Eason transferred to Washington where he would sit for a year under the starting quarterback, Jake Browning. Now that Browning is no longer eligible, Eason will take over with hopes of reminding the nation of his prowess and potential by leading Washington to another PAC-12 title. Sam Hunter (12) wishes the best for Washington’s QB saying, “I really hope he does well for Washington this year because I really liked him coming out of high school sand really got screwed over by injuries. With a year to regain form, he should be ready to be one of the best quarterbacks in the nation.” Jacob Eason has a chance to prove all the doubters wrong and Washington fans would sure love to see it.

As teams approach spring practices with new quarterbacks in tow, there are high expectations for each and every transfer quarterback coming in to lead their respective school to national prominence.